Structured water is basically water with live energy and this energy in some cicles is called Orgone Energy, Chi, Prana, etc. In essence it is living water! And the term structured has been adopted because water with this living energy tend to become more organized with a better defined overall arrangement. This organized structure is often called hexagonal as it is at times called hexagonal water. 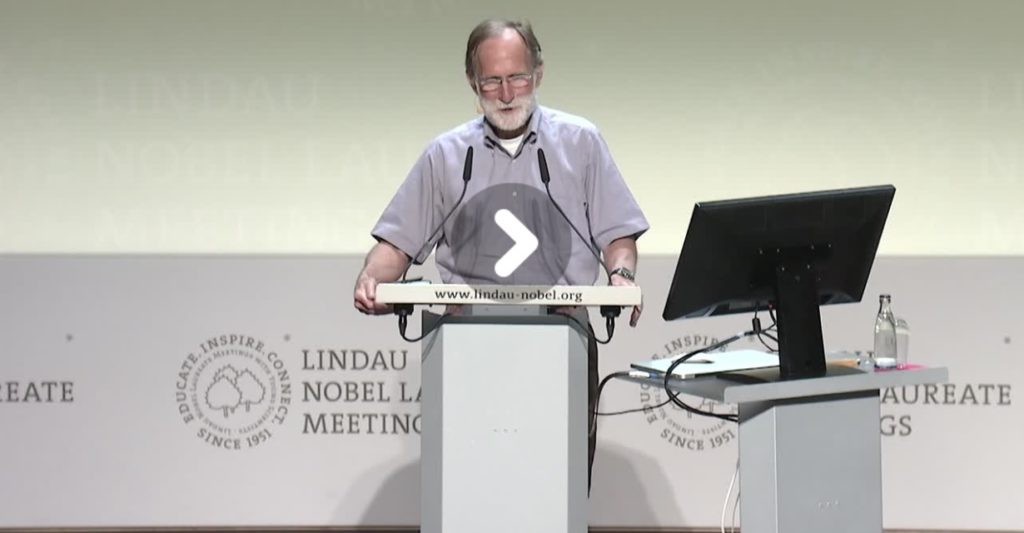 In 2003 Peter Agre was awarded the nobel prize for discovering something called an Aquaporin Channel which is like the plumbing that the cell uses to bring water into its nucleus.

And the only way that our cells can receive water through these channels is one molecule at a time. Otherwise our body has to expend a lot of energy to break the water down to get it into the cell.

Have you ever experienced drinking tons of water but still feeling dehydrated? That usually has to do with the surface tension in the water. 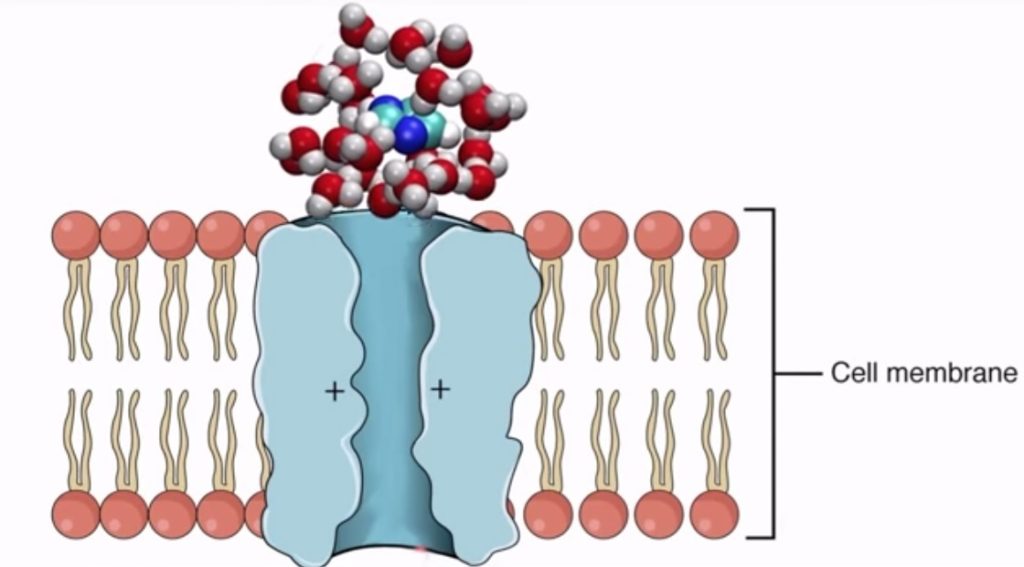 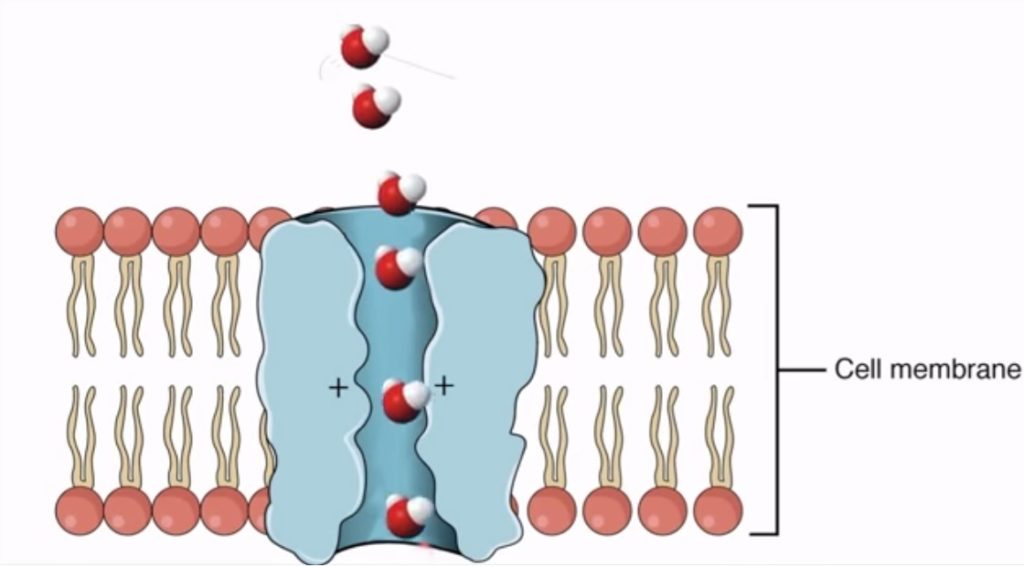 There’s a measurement called Dynes and the cells of our body can’t take in water that is over 46 Dynes but most tap and bottled water are between 72 and 84 Dynes. That basically means that the cluster of molecules is twice the size of what the cells of the body can take indirectly.

What the Natural Action water does is it uses a double vortex to almost dance the water molecules apart so they’re structured in such a way that they can enter directly into your cells to be able to nourish your body and your life force.

One of the other things that science is beginning to point to is that water has memory. It’s like a computer that maintains the energetic imprint of everything that it passes through and around. Nature has a beautiful hydrological system. 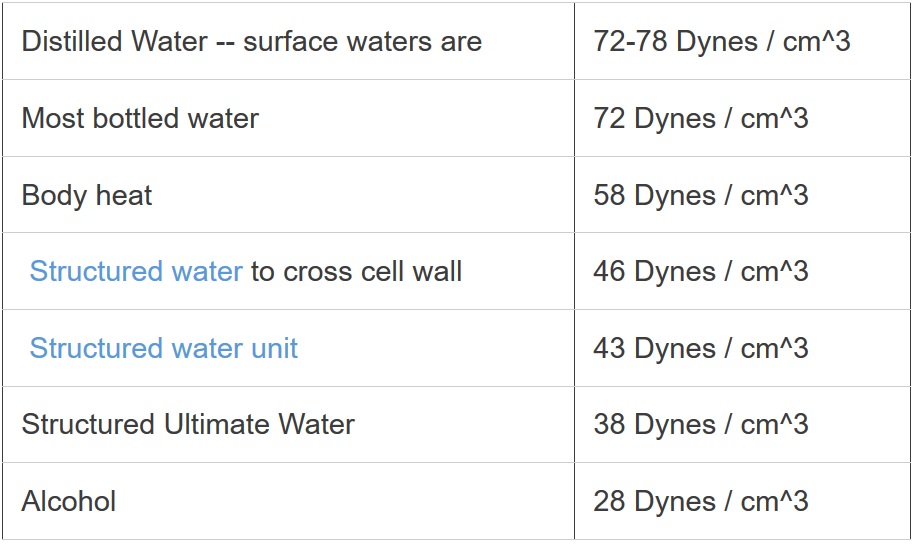 Water evaporates it comes down as rain. It goes into the lakes and ponds and onto the ground. Then it evaporates again. And it keeps repeating this process. And each time it does it it structures the water.

But unfortunately the air on the planet has become toxic. As water comes down into the atmosphere it picks up the toxicity of everything that’s around it and brings it into the lakes and streams and builds on the toxicity over and over again.

So already because of pollution we’re going to have these large clusters that don’t normally occur. But with city water it’s even worse. Cities don’t let water go back to nature. They reprocess it sometimes 20 times with chemicals and put it back into the system over and over again before it evaporates and goes back into the ground.

All of these chemicals and processes create clusters that are anywhere from a thousand to even ten thousand times too large for ourselves to process and then the body has to spend massive amounts of energy to break these clusters down into a usable form. The Natural Action Technology erases this memory from the water and allows the water to return to its pristine state. So the water is now in smaller clusters so that it can enter directly into the cell with no energy expended at all.

It uses the water as its only moving part to create a double vortex to recode the water molecule, in essence resetting the dna of the water, one way to understand this idea of water retaining memory is to look at a study that was done in germany where they dehydrated tap water. And when you dehydrate water what’s left are calcium salts and a few other elements. So what they did is they looked at the mineral imprint of the calcium and what they found was it it had a 90-degree angle.

This was the tap water, then they looked at structured water and they found that the structured water actually had a 60-degree angle. In the picture on the left you can see the angles of the Natural Action water show mostly 60 degree angles. This means that all toxins have been neutralized and basically the memory of the water has been erased.

The tap water on the right shows almost exclusively 90 degree angles meaning that the water is still holding on to all the toxins. So that’s the difference between the structured water and the unstructured water.

So what does this mean for us? The 60 degree angle demonstrates that even when toxins like fluoride or chlorine are still present in the water the energetic imprint has been erased. So the toxins passed straight through your bodies elimination system.

So again the charge of the toxins is gone and the toxins never enter our bloodstream or our organs. When you filter water all you’re doing is taking the physical components out of the water.

But if you think about when you eat an apple what is it that’s actually remaining in your body? And the answer is the energy not the physical components so everything physical that we eat or drink comes out of your elimination system.

Everything physical that we eat or drink comes out of the elimination system. So when you’re filtering the water you may be taking the physical toxins out but the energy of the toxins is still remaining.

That may enhance the taste of the water so if you’re already filtering the water you can continue to do that but what I like to do is make sure that the water is structured because that’s when I can ensure that the energy and the memory of all the toxins has been eliminated.

As the water passes through the unit it creates two spirals one to the left and one to the right simultaneously. This erases the stagnant and toxic energies and transforms the arrangement of the molecules into happy living water.

There’s a Natural Action unit for a lot of different needs. My favorite is the portable unit which is like a funnel. So you can take it with you to restructure any water that you’re drinking and energize it.

And also it helps when you have fruits and vegetables that have lost a little bit of their vitality you can take the structured water.

And let’s say you have some kale or some broccoli or some blueberries and soak them in the structure of water. And it totally revitalizes them and brings back the energy.

Or if you’re out to eat at a restaurant you can actually put a little bit of structured water you can even spray it on your food and it will help to restructure everything that you’re eating.

I really like this because I travel so much and I just it means that I don’t really need to worry about my water anymore especially because we can’t take our water on airplanes anymore and wherever it is.

If I’m at a hotel or anywhere I can use the Natural Action unit and just restructure the water myself. And I don’t even have to buy bottled water which I don’t like to do because I don’t like to use plastic. So it comes in really really handy especially when you’re traveling. 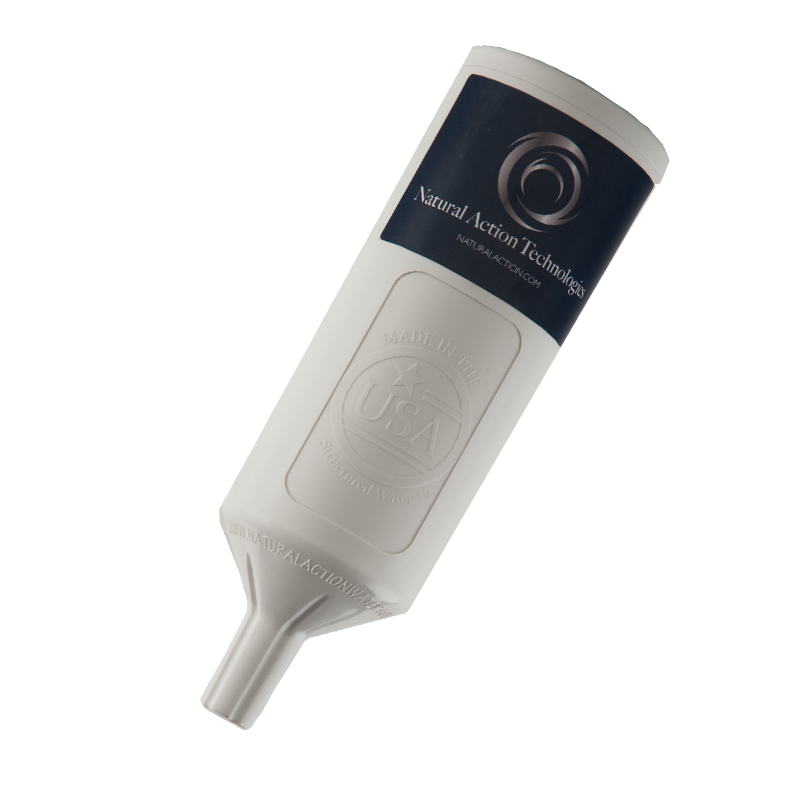 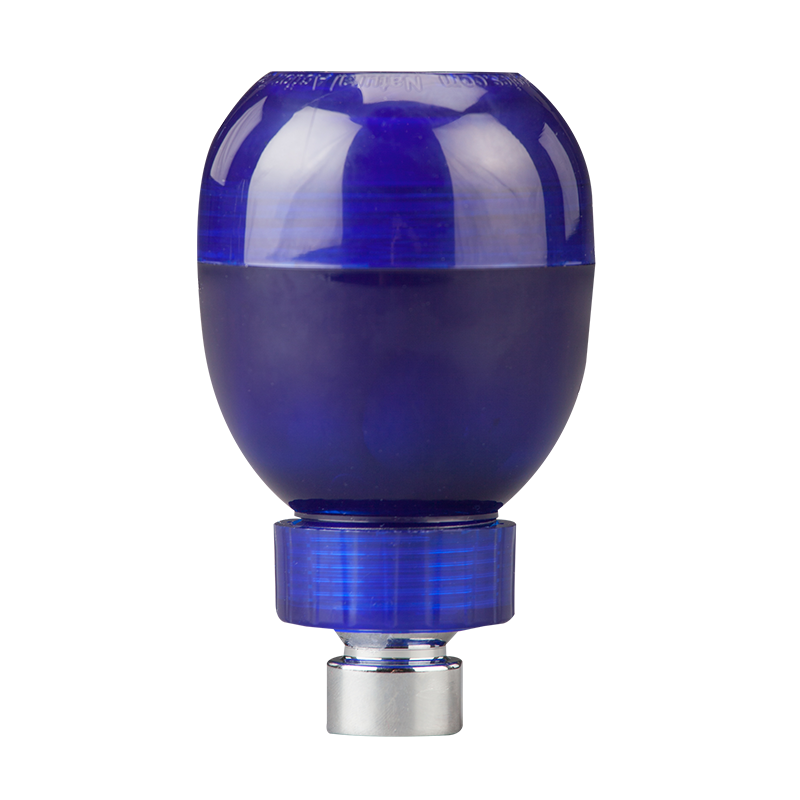 There’s also a shower unit so even the water that you shower with or even bathe in because you can fill the bathtub with it is going to be in its pristine state.

Now this is very important because the amount of water that enters the body when you’re taking a shower is actually a lot it comes right through the skin and your pores.

And also the heat when you take a shower that heat makes the chlorine if the water’s been chlorinated makes it easier for the chlorine to enter your body.

This is really important for detoxification especially when you’re using water that’s been chlorinated or fluoridated because that’s going straight into your skin when you take a shower or a bath with that water. A lot of people notice that their skin starts to look more radiant after they started showering or bathing in the Natural Action water.

Another great thing about the Natural Action devices is that the way that they’re designed nothing ever needs to be replaced. So once you have one you have it for a lifetime. And in fact Natural Action has a lifetime warranty so even if you break it you can send it back to them and they’ll replace it free of charge.

Natural Action water is also incredible for gardening when they’re a lot of calcium on the surface of the soil it’s very hard for the seeds to germinate and sometimes they won’t germinate at all.

There’s two gardening units a small and a large unit and these units hook up to the gardening hose which is great because you can really help your plants thrive and become much more nutritious. There’s a measurement called Brix.

That will help to identify the sweetness or nutritional value of a fruit and you can test this with something called the brix meter. So there have been some studies with strawberries where they watered the strawberries and they were trying to test the difference between using unstructured water and structured water.

And what they found was that the strawberries that were watered with unstructured water had a brix an average of about seven. Now to sell a strawberry in the market you want it to be a brix of about ten. So what they found is when using structured water the brix went up to 14. Since I started using the garden unit in my garden I noticed that the persimmons on my persimmon tree have doubled in quantity and quality. 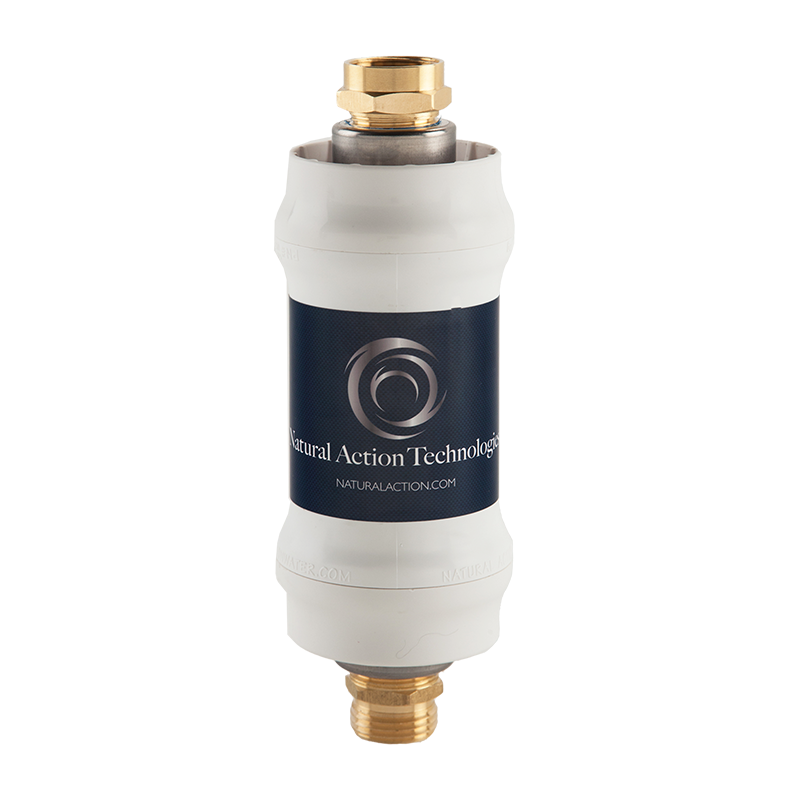 Another great option is the whole house unit and I love this unit because it attaches right to the cold water line that runs into your house.

A lot of people like to use the unit that attaches under the sink and this is handy for a couple of reasons. First of all because you can just turn on the faucet put your cup or whenever you have under the faucet and you know you have structured water.

Since I love to get as much energy as possible I use the whole house, use it in conjunction with the shower unit, the under the sink unit and the portable. 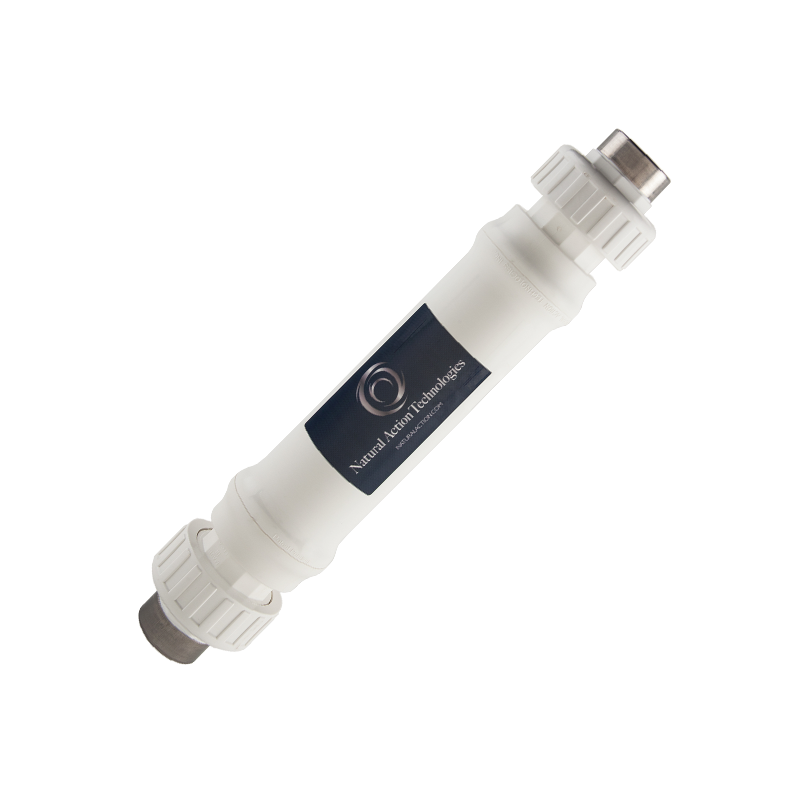 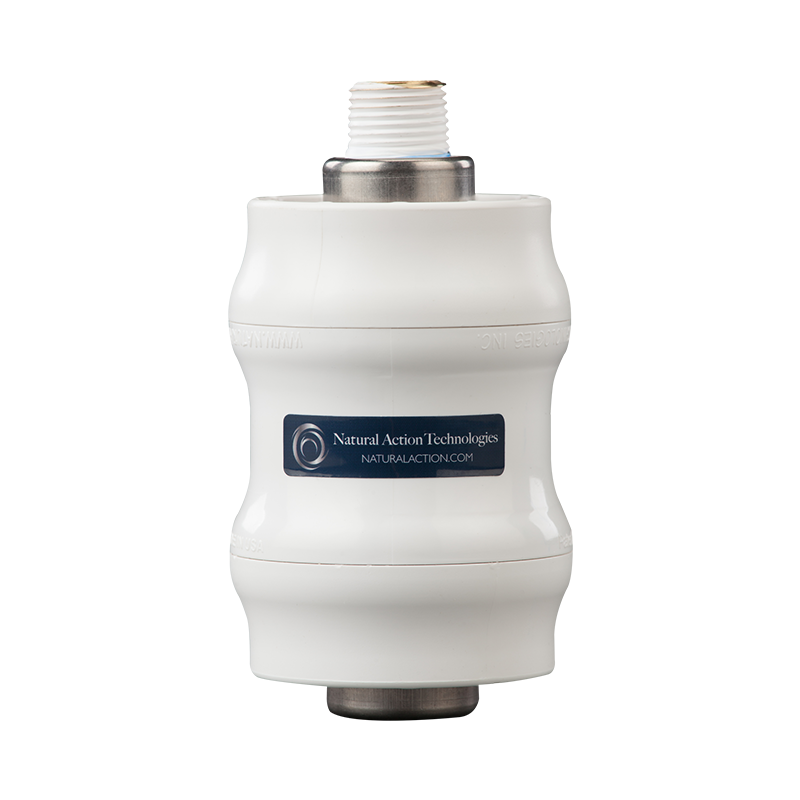 So when I’m drinking water I have it structured at least three times and sometimes I’ll do it even more each time you run it through a structuring unit. It energizes the water even more so Clayton Nolte suggests to run it through up to six times to get the maximum amount of energy.

If you’re on a larger scale you can use the commercial unit which is great for farming, for swimming pools or for a larger commercial building, because structured water has the ability to affect all the water around it, the potential healing benefits for the individual and the entire planet are tremendous.

Feel free if you haven’t already to check out my website restoremethod.com for tons of great resources for your personal transformation and the health of your family you. See Natural Action products here.

“This site is a participant in the Amazon Services LLC Associates Program, an affiliate advertising program designed to provide a means for sites to earn advertising fees by advertising and linking to amazon.com, amazonsupply.com and myhabit.com.”
These statements have not been evaluated by the FDA. No product mentioned in this website is not intended to diagnose, treat, or cure any disease.
All material provided is meant for educational purposes only and should not substitute for a medical consultation. All readers are strongly encouraged to consult and work with an experienced health-care practitioner.
About Us | Affiliate Disclaimer | Contact Us | Disclaimer | Privacy Policy | Terms & Conditions | Medical Disclaimer | Refund, Return, Shipping Policy | Sitemap | XML Sitemap | Images | Mobile | Video